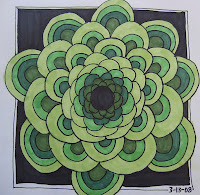 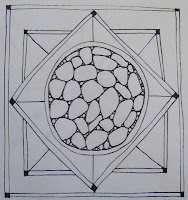 Well, this blog was done last week only I neglected to 'publish' it.  So, there will be two blogs this week!

In response to Franz Nicolay's review of my work last semester I will try to answer his questions or concerns as I move forward with my current proposal.  It's coming all to clear that I will be tweaking my proposal this semester as I see the work evolving.  Franz wanted me to talk more about my interest in the mandala form and how it's history and cultural association have impacted my path.  I'll begin with my personal history with the mandala form.  The connection to the mandala goes back to when I was 5 or 6.  I would sit and make black crayola circles for hours on end. I'd fill in the circle with color and then outline the inside colors in black as well.  They now look like leaded stained glass window designs to me.  Circles upon circles with various images or made up designs in them.  Obviously I was doing them for fun and the word mandala never entered my vocabulary.  Somewhere I still have a few of those old drawings but I have no idea where the circle idea came from.  The mandalas in this blog are some from my sketch books over the years. 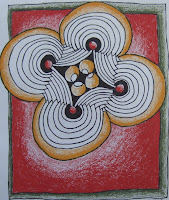 Through the ensuing years I kept getting drawn back to filling in circles.  Somewhere along the way I learned about the mandala and what they were but it really didn't hit home with me until I took a workshop at the Jung Center in Brunswick, Maine.  The subject:  Mandalas.  We were given charcoal black paper and brightly colored chalks and were told to draw a big circle.  We were then asked to meditate and find our centers and fill the circle in with anything we wanted.  The power of that meditation and the centering was something I didn't expect.  That was 1980 something.  I think that was my calling to use mandalas as a vehicle for expression.  I have sketchbook upon sketchbook filled with them. 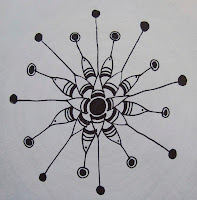 If I sit in the early morning and draw a mandala in my sketchbook then it never fails I have a more confident day and there seems to be time enough in the day to do everything I want to accomplish.  It's become like eating or breathing for me I guess.  They nourish and sustain me. Mandalas are such an integral part of who I am that I don't even know when I'm making them sometimes.

The Tibetan Buddhist tradition involving the creation and destruction of mandalas are made from colored sand. A sand mandala is ritualistically destroyed once it has been completed and its accompanying ceremonies and viewing are finished to symbolize the Buddhist doctrinal belief in the transitory nature of material life.

Interestingly, I've chose the medium of glass to work with in creating my mandalas.  There is one similarity to the Tibetan process and that is that a lot of times I will cut the finished pieces up and not use them in a ritual but create new pieces from them, or parts of them.  The fact that I can do this without too much concern is so freeing.  I learned a long time ago not to get too excited about a piece or feel it's too precious.  (The kiln goddesses are not always on duty like they should be).  I think it bothers others more than myself when they see me cutting into a beautiful piece of fused work. 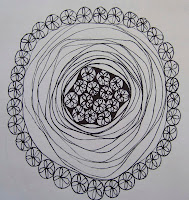 Franz states, "I am interested in how intention and process work to inform each other.  I believe in the continual exercising of one's intuition, tempered by a heightened skill set, to allow for an artist to become an informed conduit for creative thought and inspiration.  Is that spirituality? It certainly touches on that plane.  The best work does, and is a blend of left and right-brained exploration."  It is a challenge to intentionally balance intuition and intention/process.  I find it a sort of zen experience when it comes together.  There is no sense of time, no other thoughts other than the work at hand.  My intuition remains extremely strong and more times than not is directing the show.  The extensive skillsets that I have attained over the many years working with glass has allowed that to happen more easily.  There's a Paul Simon song that I think of every now and again..."Maybe I Think Too Much".  I'll play that when I get stuck.  Because getting stuck usually has something to do with too much noise: too many options of materials or too many directions a piece could go in.  Intention is always where I start though. 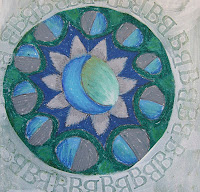 I am still working on adding the photographic element to the fused glass process and in particular, the mandalas.  These photos would be more of an abstract nature.  Totally drawn upon from photos that I have taken of nature.  I'm still gathering the right supplies for the photo-transfer process. 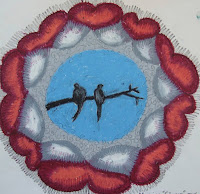 In my original proposal I stated that I would make some clay molds in which to slump the mandalas into.  That has been changed to using pre-made forms.  The reason is so that I can focus more on the glass work instead.  I would like to explore this aspect but will do than another time.  I have made clay molds and carved them to slump glass into and they were successful.  Small but they worked. 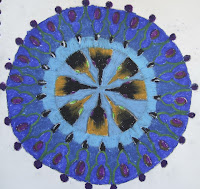 I've also decided not to add text to this current body of work.  The text I was thinking of was calligraphic in nature.  I do like the unreadable suggestion of text that I've been using lately.  It is fluid and gives the viewer the suggestion of text.  The obscurity of that is what I like.  I don't want the text to command the attention of the piece.  It may sound like a cop out but until I know what I want to say, or have the piece say, I will keep the obscurity in the text, which also becomes a design element in itself.

This semester I have been reading "La Bella Lingua" by Dianne Hales.  It's a book about learning the Italian language.  I am also reading many books on techniques in glass that will help me understand more processes better, particularly the firing process.
Posted by Unknown at 10:37 AM No comments: 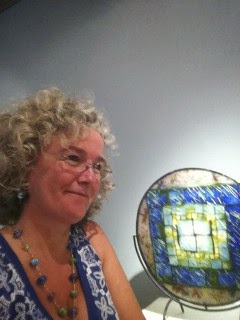 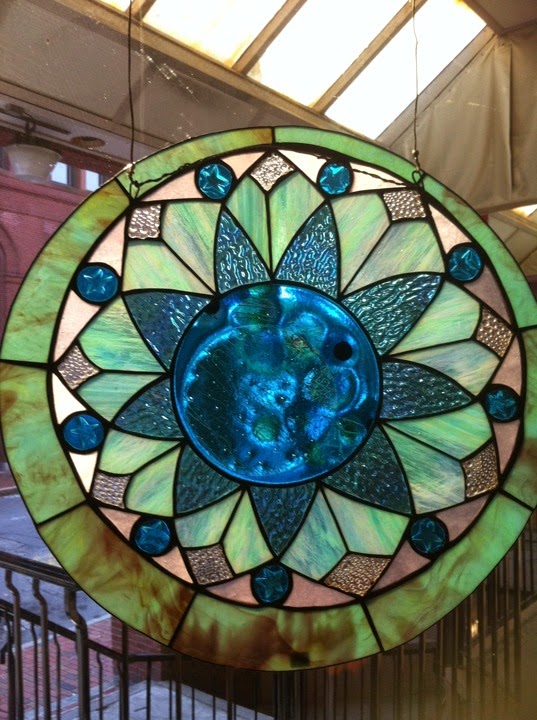